For many countries in Europe, World Theater Day 2022, which celebrates the theater arts and their unifying power, is marked by the war in Ukraine. 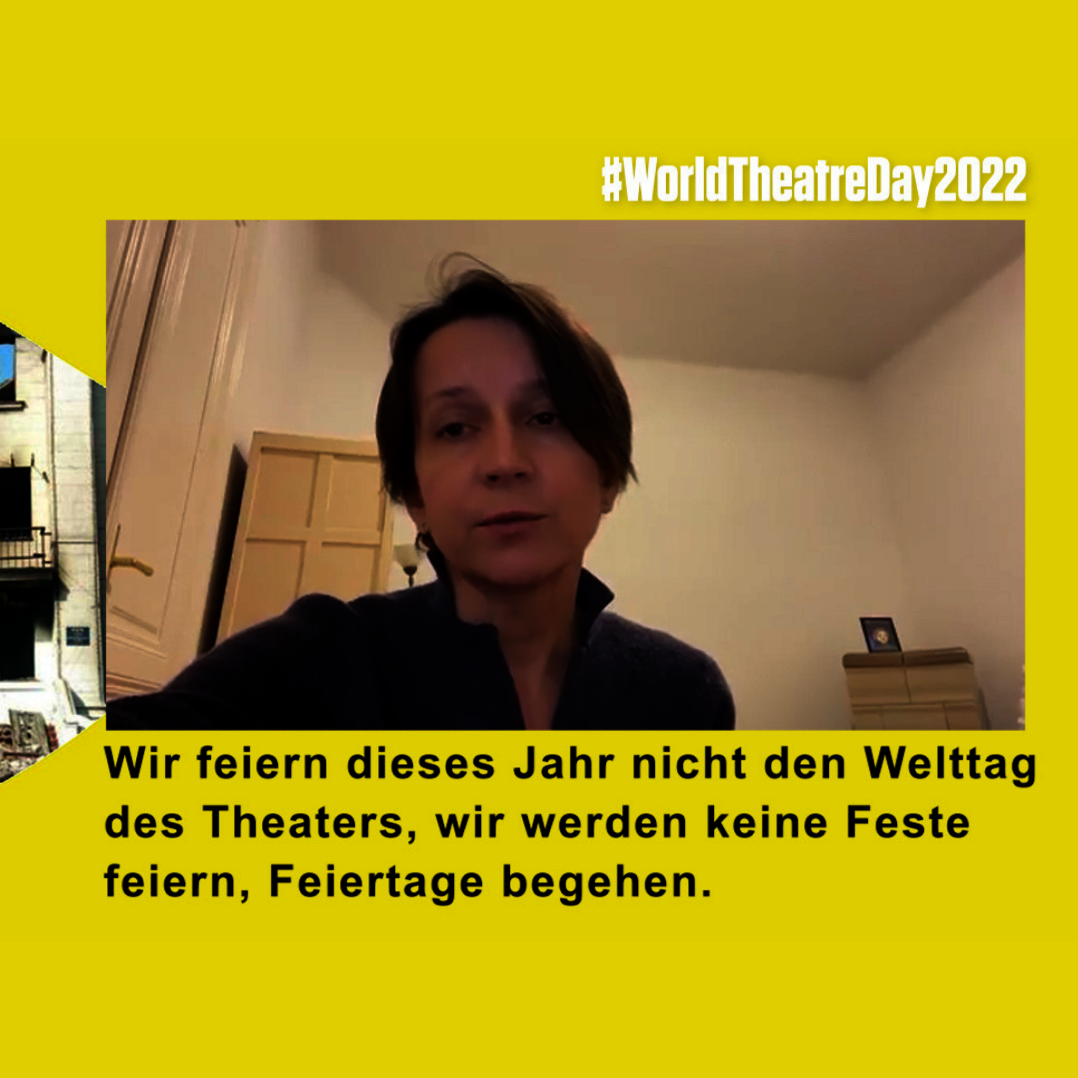 For the German Centre of the International Theatre Institute and its members, World Theatre Day 2022, which celebrates the theatre arts and their unifying power, is marked by the war in Ukraine. There, theatres are becoming shelters for the inhabitants of their cities, being shelled and reduced to rubble. Together with the Deutsche Bühnenverein (German Theatre and Orchestra Association), the ITI - German Centre asked the Ukrainian playwright Natalia Vorozhbyt to write a statement based on the image of the destroyed theatre in Mariupol. On Sunday, March 27, the video message by Natalia Vorozhbyt will be shwon in many theatres and concert halls throughout Germany. The campaign is also running on social media (facebook and instagram) under the hashtag #WorldTheatreDay2022.

ITI President Yvonne Büdenhölzer states: "Today's 60th World Theatre Day is marked by destruction and terror. With Russia's war against Ukraine, we are experiencing an escalating spiral of violence with unforeseeable consequences for us all. Our solidarity is with the victims of the war and it is with all those who are rebelling against it."

In the statement of the Deutscher Bühnenverein (German Theatre and Orchestra Association), President Carsten Brosda, using the phrase 'The war shall be cursed' from Brecht's Mother Courage, which has been quoted by many theatres since the beginning of the war, calls for us not to remain in a state of shock and to maintain confidence in the enlightening power of cultural encounters and artistic cooperation.

In their "Statement for Peace and a Constructive Dialogue", the President and Secretary General of the ITI refer to the preamble of the UNESCO Constitution of 1945: 'Since wars begin in the minds of men, it is in the minds of men that the defences of peace must be constructed' and affirm: "Our purpose is to overcome divisions, and to keep the lines of communication wide open between all peoples of the world.

Earlier this year, Peter Sellars wrote his World Theatre Day message asking, "In a world overwhelmed by vast press campaigns, simulated experiences, ghastly prognostications, how can we reach beyond the endless repeating of numbers to experience the sanctity and infinity of a single life, a single ecosystem, a friendship, or the quality of light in a strange sky?" In a few painful weeks, his invitation "...for deep refreshment of our minds, of our senses, of our imaginations, of our histories, and of our futures" has become an utopia. An utopia we must hold on to if we believe in all that connects us to theatre on our planet.

Instead of a general celebration of World Theatre Day, this year on 27 March, together with the message by Peter Sellars, videos of an international competition for young theatre artists will be shown in a digital event. These videos were created last year and speak of the hope for exchange, encounter and mutual curiosity.